USS Portland, the lead ship of the Portland class of cruiser, launched in 1932. She completed a number of training and goodwill cruises in the interwar period before seeing extensive service during World War II. Her first wartime action was at the Battle of the Coral Sea in 1942, escorting the carrier Yorktown and rescuing survivors from the carrier Lexington. She repeated this escort assignment for Yorktown for the Battle of Midway.

For the Guadalcanal campaign, she initially supported the carrier Enterprise, but was torpedoed and put out of action for 6 months during the Naval Battle of Guadalcanal. IN mid-1943, she returned to combat – performing shore bombardment s at the Aleutian Islands, Gilbert and Marshall Islands, Mariana Islands and New Guinea. She was at the Battle of Leyte Gulf in October 1944, engaging Japanese vessels at Surigao Strait. In 1945 she supported landings during the Battle of Okinawa until the close of the war. 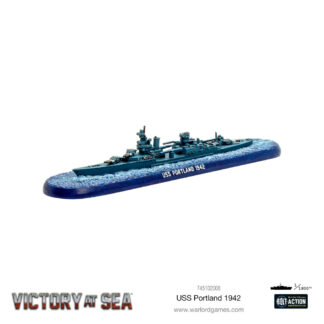 You're viewing: Victory at Sea: USS Portland £10.80
Add to basket