Yahagi was the third of the Agano class of light cruiser, intended to be the flagship of a destroyer flotilla. She was completed in December 1943. She participated in the Battles of the Philippine and Leyte Gulf and remained relatively unscathed despite weathering repeated attacks by enemy aircraft during these actions.

She was one of the vessels instructed to accompany Yamato on its final suicide run against the American invaders off Okinawa. On 7 April 1945, this task force was beset by 386 enemy aircraft. During the first wave of these attacks, Yahagi was struck directly in the engine room, and rendered unmovable. Subsequent waves rained more bombs and torpedoes upon her, such damage making rescue impossible. 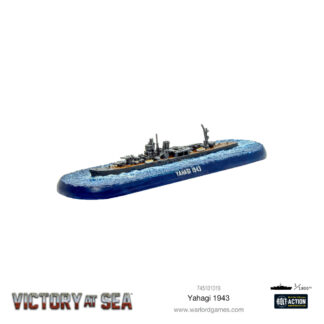