Zuikaku ( 瑞鶴 “Auspicious Crane”), a Shōkaku-class aircraft carrier, along with her sister ship, were the most successful carriers operated by the Japanese Navy during WW2. The Japanese had learnt many lessons prior to her construction and as such Zuikaku was considerably larger, better armed, and had a higher aircraft capacity than previous purpose-built Japanese Carriers. Setting sail in November 1941, her complement of aircraft included 18 Mitsubushi A6M fighters, 27 Aichi D3A dive bombers and 27 Nakajima B5n torpedo bombers.

She was part of the task force whose aircraft attacked Pearl Harbor in December 1941, and was a prominent participant in many subsequent battles in the Pacific Ocean – including, Java, Ceylon, the Coral Sea, the Eastern Solomons, Santa Cruz, the Philippine Seas and Leyte Gulf. It was at this last action that she was sunk, at the Battle of Cape Engano on 25 October 1944. She was the last of the six carriers that participated in the Pearl Harbor attack to be sunk. 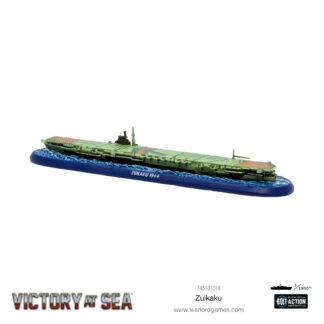 You're viewing: Victory at Sea: Zuikaku £16.20
Add to basket