The Marcher Worlds is a Coalition of Free States, unified by their resistance to outside governance. Often settled on harsher or more hostile planets in the Hyperuranion, those who inhabit the Marcher Worlds are resourceful, adaptable, and stalwart, or they would not be able to survive in the conditions they do, much less repel the advances of the Alliance as well as many other threats to civilization. Their militias and militaries make due with what they have and employ unconventional strategies and tactics to overcome their adversaries. Coalition Warcasters range from devoted patriots fighting for the freedom of their people to renowned mercenaries ready to sell their talents to the highest bidder.

The Marcher Worlds Command Group Starter Set contains everything one player needs to begin battling across the Thousand Worlds of Warcaster: Neo-Mechanika. 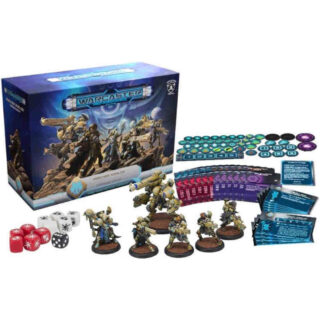