Trained and equipped to work seamlessly in support of their Warcasters, the Coalition Weavers are the spearhead of the Warcasters’ arcane might. Swift moving and hard to pin down, these aggressive Weavers open their minds completely to their Warcasters’ destructive power, enabling them retain an echo of the Furies channeled through them for concurrent projections. The Coalition Weaver‘s battle staff is a potent force weapon, capable of slamming any enemy out of their path.

– The Coalition Weaver can channel destructive Fury Cyphers.
– When this Weaver is used to channel a Fury, it can spike to return the Fury to your hand and out of the discard pile.
– While charged with Arc, Furies channeled through it gain +5″ range.
– The Coalition Weaver‘s Battle Staff melee weapon is capable of slamming models it strikes. 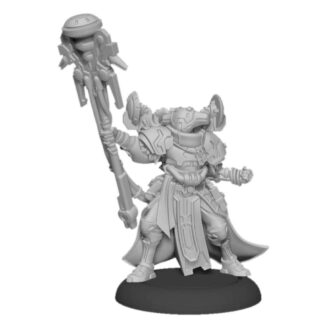