Trained and equipped to work in concert with Coalition Warcasters, the Rangers are the elite forces of the Marcher Worlds. Armed with fusion blades, mechanically augmented battle rifles, and Arc-draining null detonators, Ranger Fire Teams are well able to fill a variety of combat roles. Their slip displacers — standard issue amongst Ranger forces — allow them to spend Arc rapidly and unpredictably make their way across the battlefield to positions where they are best able to lay into the enemy.

– Three-model squad.
– While charged, the squad’s ranged weapons gain +4 RNG.
– The squad can spike to activate its Slip Displacer, enabling it to immediately move up to 3″.

>
Warcaster: Neo-Mechanika is a high-speed hobby miniatures game for two players who each take on the role of a powerful Warcaster in command of a formidable battle force! 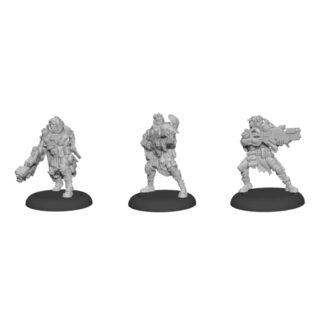