As their name suggests, the Ranger Heavy Support squad provides devastating fire support to Ranger forces in the field. Packing man-portable talon rocket launchers, these troops would be considered slow moving if not for their slip displacer mechanika that enables them to keep up with the forces they support with ease.

☆ While charged, the Ranger Heavy Support squad’s mechanika targeters enable the troopers in the squad to reroll their ranged attack rolls.

☆ The squad can spike to activate its Slip Displacer, enabling it to immediately move up to 3˝.

Players assemble and customize a force of 20-30 models and fight a scenario-driven battle using dice and cards to control their mighty units and to cast epic cyphers. The game is played using an alternating-activation turn sequence with a round tracker that governs scoring opportunities and the duration of ongoing effects. Players take turns activating units one at a time and using their rack of cyphers, reality-warping spells that can be used to enhance their troops and warjacks or to devastate their opponent’s forces. 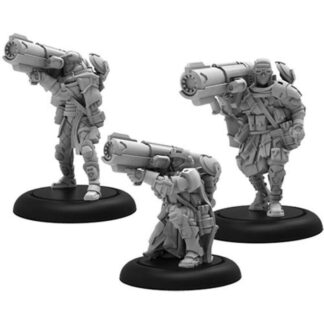