One hundred and seventy five years into the future, the human race has reached the stars. The ancient nations have gathered into immense, international, federated blocks and have divided the star systems proved suitable for human life. The most advanced medicine makes it possible to extend life, and together with the most advanced (and most expensive) technology, almost reach corporeal immortality. It also allows treats such as the most popular extreme-contact sport: Aristeia!, a series of high-level, armed combats where death is a real possibility.

Aristeia! is the new sports game by Corvus Belli, a MOBA-style tabletop game that allows two players to take the role of competition team managers in the greatest visual show of the Human Sphere.

You don’t need anything other than the *Aristeia! Core Box *to enjoy one of the best games on the market, as it contains everything you need to play.

Aristeia! goes beyond. Every three months we will release an *expansion pack *that will include four new characters to add fun to the table. The expansions are independent from each other, so you don’t need all of them to play!

And there is more. Aristeia! has a solid *organized play system *that will allow you to get the most out of the game. Your skills as a manager will be put to the test each season. 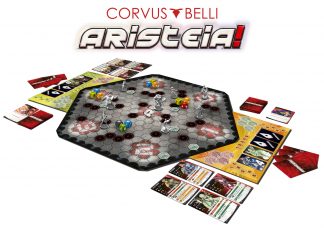