Add to my Wishlist
Category: The Dweghom Tags: Conquest: The Last Argument of Kings, Miniature Games, The Dweghom MPN: PBW7332

To behold a Hold Raegh on the field of war is to witness a Paragon of his craft at the very pinnacle of his prowess. To rise to the position of Raegh, a Dweghom must reach a value of Aghm determined by the Mnemancers of each hold (considering the population, productivity, history and achievements of the Hold in question) while surpassing all others. In a society as militarized as the Dweghom, there is only one path that can lead to such heights: the craft of war. In the early stages of his prospective career, an aspiring candidate earns his Aghm directly: feats of arms and valor at the trials, and later the field of battle.

Rising through the ranks in the military machine of a Dweghom Hold is a very difficult process, riven with physical danger on the battlefield and traps and pitfalls in the advancement as an officer, for, the higher one seeks to rise, the lower he may fall. For this reason, many Dweghom warriors, who have earned the right to command soldiers, chose to forgo the honor and potential advancement, content instead to remain a part of the rank and file.

This simple stage eliminates those who lack the drive, ambition and courage to pursue the path of leadership. Once a commander, a Dweghom continues to accrue Aghm through personal skill and valor, but also through the performance of his troops, both on the field of battle and during the interminable drills and patrols that mark the daily routine of a Dweghom Hold. The higher one rises, the greater the proportion of his Aghm is dependent on the performance of his troops, encouraging Dweghom leaders to pay close attention to the individuals under their command, weeding out the inept, lazy and just plain unlucky as it has a direct impact on themselves and their future career.

This is the most dangerous stage in the advancement of a Dweghom’s career, not just because he must relentlessly push his troops and himself to excellence, but because he must continuously defend what he has already accrued from challengers. Only those of equal or higher rank may challenge an officer, meaning from the moment he enters the field, an ambitious officer must endure not only the dangers of the battlefield but also the relentless challenges from his equals or betters who seek to thin the herd or cull the competition before it can rise to threaten them, often from their own troops.

There are many holds, therefore, in which no single Dweghom can rise to the rank of Raegh. Trapped by the pitfalls of the system, the most worthy candidates ruthlessly crush aspiring contenders at the expense of advancing themselves, fearful of losing the labor of a lifetime. This leaves the Hold leaderless, devolving power down to a triumvirate composed of the highest ranking Mnemancer, the leader of the Ardent and the Forge Lord of the Tempered.

Thus, when one encounters a Raegh, one knows he stands across one of the most capable fighters in a Hold, ruthless enough to have crushed all opposition so that his assent was assured, or talented enough to defend himself against all comers, while simultaneously rising through the ranks. Unfortunately for the Dweghom race as a whole, and their neighbors, this process seldom encourages skills and virtues such as diplomacy, compromise and patience… To most Dweghom this is just as well, providing more chances to take the field of battle and earn more Aghm. 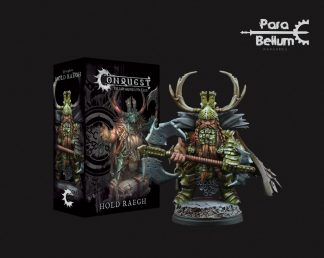