Corruptors are first on the target list for any UCM Infantry force Commander, and with good reason. While not specifically deadly themselves, they carry a violent cargo that spells certain destruction to any garrisoned units; Razorworm Pods.

Equipped with several underslung launch tubes, the Corruptor will approach an occupied structure before firing a salvo of breaching torpedoes directly at the walls. These are essentially hard-tipped cones with a small plasma charge at the top, containing a single Razorworm suspended in viscous liquid.

On impact with the walls, the charge will trigger, blasting a hole in the building and spraying the fluid into the interior along with the Razorworms. The shock and awe that this tactic creates is compounded by the

Rules for this unit can be found in Reconquest: Phase 2

The Reaver is a roving predator of the skies with the sole purpose of annihilating enemy ground units. It is armed with a pair of sleek Plasma Lances – which are more flexible and lighter versions of the standard Plasma Cannon. Each Lance is mounted independently, allowing the Reaver to engage two units simultaneously, greatly increasing its potential kill rate.

Although it features a much heavier frame, the Reaver is built around the standard Intruder hull. An additional bulkhead section gives the Reaver increased survivability, although prudent commanders would be wise to avoid heavy AA fire. As an Intruder-based aircraft, the Reaver also sports the ubiquitous Plasma Hose, which provides an extra light anti-armour shot or the ability to atomise swathes of infantry unwise enough to spend time in the open!

Full background and rules are now available in Reconquest: Phase 1 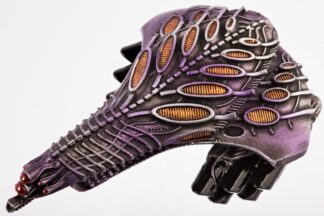