Hikari had an interesting development. Her designer wanted a generic profile with two tracks that could stab people in the back… amongst other things. The prize is to design a character however so with some tweaking we made Hikari into the fourth Yuta sister.

When offered the Bargain all of the sisters had to agree for their power is shared and some of them accepting would not be appropriate. Hikari rose above the base desires, greed and hunger for power and refused. Sadly her sisters knew that three yuta would be accepted as readily as four, as long as the whole coven took the bargain. Hikari was murdered by her sisters and this act sealed their fate. Hikari was still powerful and was raised as a Kairai but on occasion her powerful spirit can control her body and she “Lives” again… after a fashion. In a Yuta list she benefits from all of the relevant Types and shares the Yuta card. In any Cult list a Kairai with Ki Block can be useful. 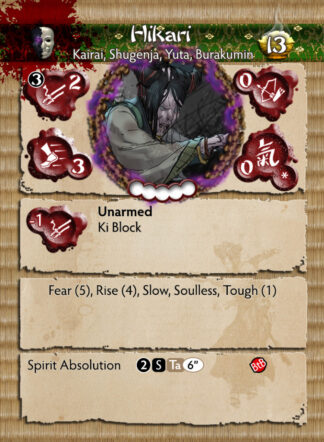 You're viewing: Cult of Yurei Hikari £7.60
Add to basket