The Daylami were a notoriously harsh and warlkine people from Persia, their name being derived from the mountainous province of Daylam in modern day Iran. The Daylami were subjugated by the Turks in the 11th century and converted to Islam. It will cost you one point to add the Daylami tov your Warband. This unit is composed of eight models, and they may only join a Warband using the Muslim SAGA Dice. The Daylami are a unit of eight Warriors equipped with Javelins, and fighting on foot. They have an Armour of 4 in Melee and against Shooting. The Daylami unit generates one Attack Die per model, increased to two Attack Dice per model if the unit engages the melee (but not when it is engaged in melee). They generate one Attack Die for every two models when Shooting. 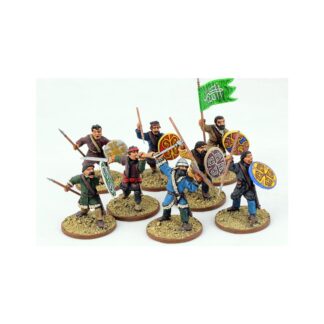