This incredible multi-part hard plastic set is a fully modular custom space station building kit – a first for tabletop gaming! It can be assembled in a virtually infinite number of ways in a massive variety of forms, shapes and sizes to fit your imagination.

All eight cruiser-sized space stations in the image gallery can be built from a single set, but these are just examples. A much larger number of smaller stations could be constructed; alternatively, players could use the entire set to build one massive orbital dock! If you wanted to create something truly gargantuan, multiple sets can also be combined.

Every one of its many and varied parts is sumptuously detailed. Superstructure, towers, comms dishes, gantries, cooling vanes, gun turrets, laser weapons and missile pods are all part of the kit, giving the builder an unrivalled degree of creative options.

Space stations are integral to many scenarios in Dropfleet Commander – highly appropriate for the game’s orbital combat setting!

This box contains 4 hard plastic space station sprues – to date the largest sprue Hawk Wargames has produced. Each sprue includes 51 different components and 71 in total – that’s a staggering 284 parts in this one set, not including the bases or clear poles!

NOTE: This kit is provided with 6 large and 8 small Dropfleet flight stands, designed to track in-game status without the use of tokens, along with a selection of medium and long clear acrylic poles. Miniatures supplied unassembled and unpainted. 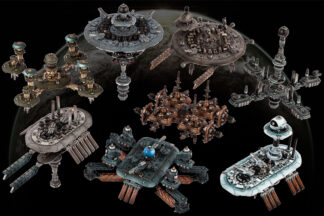