“Mauler” is the catch all term for any hulking, belligerent beasts roaming over large areas in angry packs. No matter their actual genus, this subset of Fauna are always territorial, but over a much larger area than many other Fauna seen during the Reconquest. They patrol through cities and across plains searching for threats to their sovereignty, lashing out at any they see as encroaching upon their territory.

The fearsome Maulers are Fauna, non-player units that can be used in your games of Dropzone Commander, regardless of which faction you play. They hunt in packs of three, although even a single Mauler is enough to make trouble for the most seasoned of Commanders!

The full unit profile for Maulers along with rules for using non-player Fauna are available in Reconquest: Phase 2. 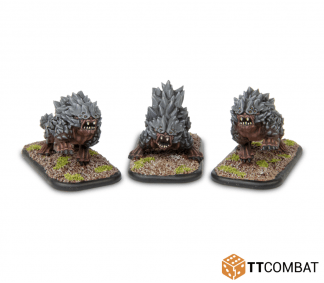