This much we know: Ninjas do not exist. All ninja clans and families disappeared in the early 20th century among the convulsions of the Meiji period. Ninjas were shadows in human form, experts in stealth, infiltration, disguise, and a variety of forms of assassination. The Yu Jing StateEmpire cannot allow the unruly Nipponese to maintain a cast of sinister executioners. Unless, of course, they work for the Government. Officially, the State disavows the existence of Ninjas. Rumours of highly qualified assassins carrying out the StateEmpire’s black operations are nothing but that: rumours. Never has one of these fabled Ninja been captured alive…

Please note: Miniatures are supplied unpainted and some assembly may be required. 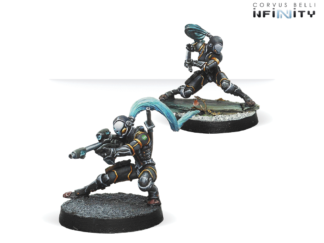