With the constantly shifting battlefields of Earth, the PHR found themselves in a new position: working alongside allies. Having fled from the Solar System some 200 years before, the so-called “Abandonists” have been deliberately reclusive. However, allying with the UCM and Resistance has led them to splinter their forces into smaller numbers in order to retain some semblance of secrecy. This is where the Proteus Mobile Command Post comes into play.

A small aircraft, the Proteus is kitted out with advanced communication equipment to provide up-to-date coverage of the battlefield, and when the fight is over is can quickly relocate. It is outfitted with a top-range EM Disruption Field Generator which is able to scramble enemy targeting, protecting not only the intelligence onboard, but friendly escorts as well. The Proteus’ limited size does impact its power generator though, and to gain full use of its onboard command equipment and EM measures together, it has to divert power from the thrusters, meaning it has to stay grounded to use its full potential.

The Proteus is a great choice for PHR players looking to field an inexpensive Command option with a little more flexibility than a Type-2 walker. As an Aircraft the Proteus doesn’t need a transport and can relocate on the fly.

However, you’re likely going to want to find a decent spot to land in, as when landed the Proteus gains the benefit of not only an increased Command Radius (something extremely useful for lower level Commanders), but also access to the Disruption Overcharge weapon. This little gadget does no damage, but enforces a +2 Accuracy penalty on an enemy squad in line of sight. That can really mess with your opponent’s plans, especially when you take into account the already excellent passive Accuracy modifier of the Proteus! 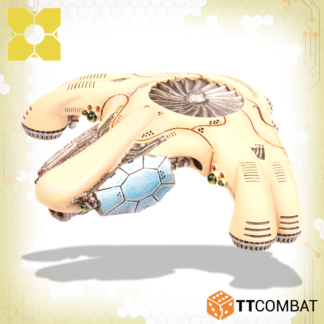