Days before the Scourge invasion a small contingent of humanity left Earth and the Cradle Worlds, led by an alien artificial intelligence known as the White Sphere. Those that fled with it fired on their pursuers, an act of rebellion that forever tarnished them among those who remained.

150 years after their retreat, the Abandonists returned, changed beyond measure. Now known as the Post-Human Republic, they appeared with vastly superior technology, and a symbiotic relationship with their machines. Protected in thick gleaming armour, massive walkers stride to war, firing devastating weapons and controlling nanomachines to do their bidding.

This box contains a perfect small PHR army. With 8 Type-1 Walkers, 8 bases of Immortals all in Juno APCs, you have a solid core for an army. The Type-1 Walkers have several weapon options, able to be constructed as a mixture of Ares, Menchit or Phobos. All of these are brought to battle in 6 of the incredibly survivable Neptune Medium Dropships.

The army is led by a Commander in a Proteus Mobile Command Post. This platform is an Aircraft, meaning it offers unparalleled mobility for the PHR Commander. Complete with an electromagnetic warfare suite, it makes a powerful support unit.

Miniatures supplied unpainted and unassembled. This kit will require cleaning and assembly, and could need some small holes filled. 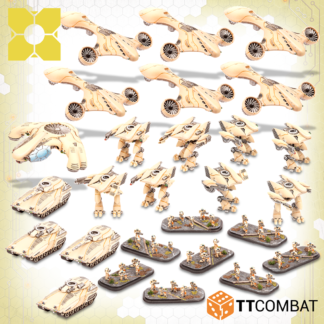