The Armstrong, Aldrin and Collins are some of the earliest human starships still in service; dating back to the late 24th century, they were designed for endurance exploration. Every UCM Colony was discovered by hit and miss expeditions, requiring many semi-random foldspace jumps until a usable world could be found, explored and given a node. Such dependable hardiness ensured three centuries’ service. In size and capability they equal a modern destroyer, though in displacement they are more akin to cruisers due to multiple redundancies, cavernous storage and antique tech.

This set contains 3 Resistance Armstrong Destroyers, all able to be built as either Armstrongs, Aldrins, or Collins! There are parts to build 3 of each, and also 9 bridges, allowing loads of variation on your ships.

With a chunky design the out-bulks most other ships of their class, you can tell that these are Resistance ships! The Armstrong is armed with a deadly HF-6 Clearance Laser which – while useful in the long task of asteroid clearance, is put to much better use against enemy ships, offering Resistance an option for Burnthrough! The Aldrin design is the “standard” colony ship in the old EAA, and while it doesn’t have much offensive capability, it is able to drop Bulk Landers from Atmosphere. Finally the Collins uses its extensive refuel and repair bays to keep friendly fighters in the air for longer – a useful tactic indeed for Resistance’s Point Defence!

Resin miniatures supplied unpainted and unassembled. This kit will require cleaning and assembly, and could need some small holes filled. Other ships and gaming mats are for scale purposes only. 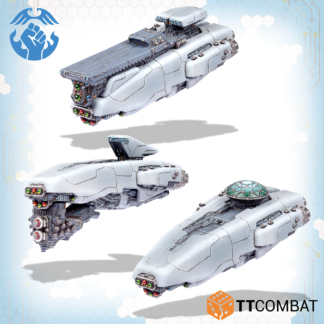