The practice of Resistance commanders sending their armies into battle in vast hovercrafts is not one of tactical advantage, but more necessity. Faster and hardier than the frequently ramshackle or low-spec technicals and wagons, the hovercrafts fill a vital role when air support isn’t available. The Resistance have found great success in accompanying the transport hovercraft with attack and support variants.

Smaller than the Kraken, the N2 frame can provide this tactical flexibility. Commanders will often pilot the Hydra Relay Hovercraft, which is not only outfitted with a large missile bank, but also a Scanner Array, which is useful to Resistance forces in identifying and tagging enemy movements. With the relatively low-tech systems on most Resistance vehicles, constant communication with the Hydra can prove invaluable to target their opponents.

Alternatively the N2 can be outfitted with an assault variant, commonly called the Circe Attack Hovercraft. A pre-war hybrid design, the Circe saw limited use before the Scourge invasion, but necessity (and the often complete unpreparedness of enemy commanders to deal with hovercraft) has meant it has found a new purpose. Armed with a medium-bore 180mm Vengeance Cannon for hunting enemy vehicles, it is backed up with a devastating anti-infantry flamer. With such a varied armament it is a danger to many enemies, and fully encompasses the mixed warfare approach of Resistance forces.

The Hydra is a great choice for Resistance players looking to field an inexpensive Command option to accompany massed Krakens and Leviathans. And a Circe Attack Hovercraft is a great all-round vehicle!

A Hydra has a decent ranged attack, with a Double Rocket Battery able to hurt anything thanks to its Penetrative rule. Combined with its scanning equipment, these missiles are accurate for longer ranges than usual, which means the Hydra is a great back-field unit. Its Scanner Array is a big deal too, letting all friendly unit re-roll hit rolls of 1 against an enemy within its line of sight. Combined with mass fire from Resistance wagons and technicals, that’s a big deal!

Meanwhile the Circe does a bit of everything! Its 180mm Vengeance Cannon is an upgrade from the Hannibal, but not quite as deadly as the Alexander, offering Resistance players a mid-level hunter that can still pack a punch with Devastator 2 against Skimmers and Tanks. The co-axial Flamer does exactly what you’d expect as well. With a 9″ range and 6 Shots its excellent at hurting enemy infantry in dug-in Garrisons, and that decent range gives it a lot of flexibility.

Contains one multi-part resin miniature with parts to make either a Hydra Relay Hovercraft or a Circe Attack Hovercraft. 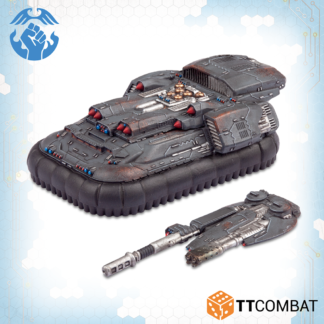