The Resistance have been living on pre-war scraps of technology for 250 years. Whether on occupied worlds or out in the depths of space, there is a limit to what these fighters can do with what they have. Kalium however, has had no such trouble. While the rogue colony with its Foldspace Nodes scrambled has had little in the way of innovation, their distance from the war front has meant they can put resources into resurrecting plenty of old designs. The Swifthawk Tilt-jet is one of those designs.

A cross between the Strikehawk and Hellhog, the Swifthawk was the early predecessor of the UCM’s Raven. Able to soar through the air or hover in place, this small aircraft has been seen in the skies above Earth since the invasion began. Seeing the speed and manoeuvrability (alongside the added air support), Resistance cells all over the planet have found reason to fix up as many as possible, helping their veterans drop quickly into battle.

The Resistance’s answer to a small aerial transport, the Swifthawk does all that, and does it well! Up-gunned compared to its Colonial cousin, the Swifthawk deals deadly fire as well as offering its cargo alternative ways to enter the battle.

While its Light Missile Battery won’t win any awards for “most devastating”, it also has a Machine Gun for hosing down Garrisons before it throws out its passengers. Hover Mode gives anyone embarked the Rapid Insertion special rule, which means this transport is excellent at providing a massive first turn surge – something Resistance players will certainly appreciate, since their Hovercrafts often take a little longer to get there! 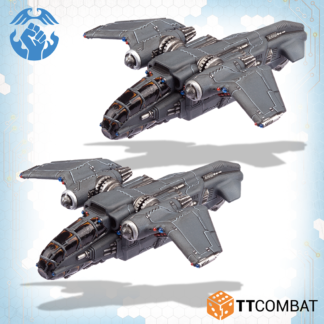