The Triumvirate of UCM, PHR, and Kalium has provided new hope on Earth and all the colony worlds. Their combined offensive has brought with it devastating loses for the alien Scourge, and Resistance ground forces have used those to their full advantage.
Previously unable to provide decent air support, Resistance occupiers have broken through into airfields and fuel depots across their worlds, fuelling and arming their pre-war relics. The Tempest Interceptor is seeing flight once more!

Larger than more modern aircraft, the Tempest is yet another example of pre-war military bloat. Expensive to make beyond measure, this interceptor is no less deadly for it. The motto of Tempest pilots is to “hit before they even know you’ve taken off”, which is often very easy with their long ranged Hailstorm Cannons.

We know that most Resistance commanders have a fair amount of anti-air weaponry (heck, you’re one of the only factions able to take it as a Standard choice!). But they definitely don’t have much that’s especially accurate. The Tempest is that thing.

A sturdy Interceptor indeed, the Tempest also incredibly fast. That means it has lots of options for dog fighting! The Tempest doesn’t have to get close thanks to its 24″ Countered range, which means you can command the skies. The Hailstorm Cannons also have a massive AA-4, and although they only hit on a 4+ it means your opponents are rarely ever going to benefit from their Evasion. Pull the trigger and watch them fall! 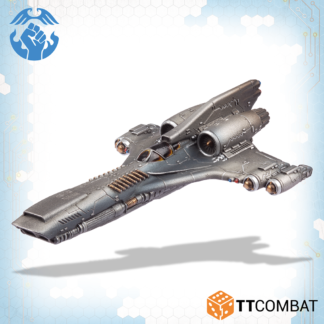