Roboute Guilliman, Primarch of the Ultramarines

A Hero from a time of legend, Roboute Guilliman is the Primarch of the Ultramarines. Created by the Emperor to be a general of His armies, Roboute was mortally wounded millennia ago, and had since lain in stasis on the Ultramarines homeworld of Macragge. Resurrected by the combined efforts of the Ynnari and the Adeptus Mechanicus, he takes up his weapons once more to battle against the encroaching darkness. While the Imperium does not want for exceptional warriors, Roboute is above the superhuman Adeptus Astartes as they are above mortal humans. He is a demigod of war, a masterful strategist, and speaks for the Emperor Himself as His regent.

Wearing the Armour of Fate, armed with the Hand of Dominion and The Emperor’s Sword, this multi-part plastic kit towers over even the Primaris Space Marines he leads. Adorned in impressive details, his armour is covered in delicate filigree, sculpted aquilae, purity seals and Ultramarine Chapter symbols. His winged backpack carries an iron halo, and features cables and hoses that connect to his armour and weaponry. Included are a choice of two heads, either bare to show his noble countenance, or protected beneath an aggressive-looking helmet.

This model comes as 44 components, and is supplied with a 60mm Round sculpted base depicting Guilliman standing astride a broken Imperial eagle, flanked by 2 burning torches. 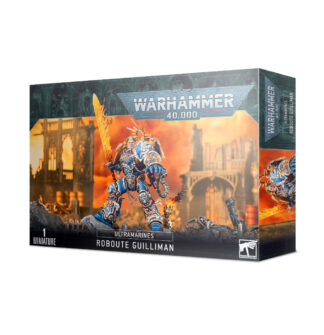 You're viewing: Roboute Guilliman, Primarch of the Ultramarines £30.00
Add to basket