A strange vehicle, the walker class named the Despot has been encountered in increasing numbers by the UCM while on Earth. Particularly in the old Chicago area, this medium-sized chassis has become a priority target among colonial forces.

Armed with the typical Scourge Plasma Hoses, it’s already a fierce foe for armoured opponents, melting through steel as easy as through flesh. However, it’s the Micro Subjugation Field that puts human forces most at ill-ease, manipulating gravity in such a way as to impede all enemy ground forces in the immediate area.

The Despot provides Scourge players with a small and inexpensive unit to house their commanders. Perfect for smaller skirmish sized games, the Despot gives a tough shell (Armour 15!) to a rather large amount of firepower. Twin Plasma Hoses give ten shots, and although they’re only Energy 4, Focus-3 allows them to take on even the toughest enemy tank.

A Micro Subjugation Field is the main pull (gravity joke) for the Despot, forcing enemy units to lose an action if they get too close. And yes, that does include infantry units in buildings. This is an extremely powerful ability which can really hamper your opponent’s plans, and – combined with the Influence radius of a Commander – makes this one unit that works best in the thick of the action.

Contains one multi-part resin Despot. 10mm in scale with a length of 55mm. 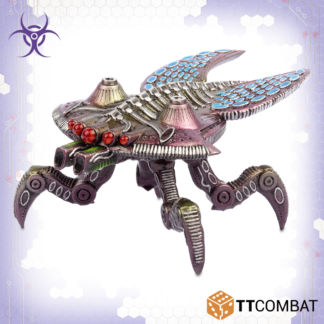