Like the Custos Crypta, the Silver Venators have arrived in the middle of the Shadow War to find they are in a world much removed from their own. The Venators are a coven of huntresses who travel the angles of time as their master’s demand. Each Venator is entrusted with a silvered key, an object attuned to their own Mythos energies. With their key, the Venators can travel through a narrow passage of 120 degrees or less through the gates of time. Using the knowledge of their masters, the Venators emerge from that same corner at the preordained point in the past or future.

The Silver Venators serve the Y’th, temporal beings who dwell in a library-realm beyond time itself. In that omnipresent place, the Y’th have witnessed the regular flow of time and can see how this Shadow War threatens to irrevocably twist that which should be impermeable. The actions of the Old Ones and their followers threatens to undo all that should come to pass after the 1920’s. For the Y’th, their past is humanity’s future and one which must be maintained at all costs.

Brigid Macleirigh and her followers Rebecca Bateman and Anna-Maria Goeldin, were spared the burning torches of witch trials in ages past and brought by the Y’th to their realm. They were trained, modified and equipped in order to face the Shadow War as agents of order. The Y’th know simply how things must be. The Silver Venators are the precision instruments by which the true flow of time is maintained.

The followers and agents of the Old Ones must be countered whenever possible, powers and dark rituals that prolong life or otherwise twist and cheat fate are abhorrent to the Venators. Knowing that the Venators are on their trail, often the enemies of the Y’th will go to extreme lengths to remove all sharp angles from their places of power and will try to eliminate all reflective surfaces to deny the Venator’s use of them.

Though distasteful, often the Venators find themselves dealing with more mundane targets. The driver who’s foot slips on the pedal, slowing their vehicle and avoiding the animal in the road that would have killed him must still meet his fate. The surgeon who cheats death and survives the trenches of the Great War must still die before he can go on to affect hundreds of lives. All of these must be hunted down by Silver Venators in order to restore the flow of time and bring order to the chaos caused by the Shadow War.

The Silver Venators are mortal and must often rely on mortal means to stalk their prey. Though able to translocate through time as required, they cannot move through distance save for conventional means. Moving swiftly to acquire their prey, the women wear hooded dark robes beneath which silver accessories gleam and they brandish brightly polished weapons. An impressive sight, but there is a reason behind this appearance. The Venators’ ability to travel through the angles of time is linked to reflections and it is by utilising reflections such as those of a blade or bracer, that their Mythos can manifest.

When a target proves elusive or is alerted to the approach of the Venators, the huntresses can resort to spiritually marking their quarry. Though physical contact is initially needed, once a target is marked in such a fashion, the Venators can exert considerable Mythos to call on a Tyndaly’th Hound. These are guard creatures of the Y’th and such beasts are built for the hunt. When hunting their prey the Hounds can materialise through any mirrored surface in the immediate presence of the target. When a Hound is about to manifest, it materialises first as a shadow in the reflection, becoming more distinct before the very reflective surface warps to form the dreadful foulness of the creature. Once they have brought down their prey, if the Venator’s cannot intercede in time, the Tyndaly’th use their long, hollow tongues to drain their victim’s body-fluids, leaving vile blue pus or ichor as their spore. Even a Venator might fall prey to a Hound if they inadvertently find themselves between the creature and its quarry or if the rite to summon them is performed imperfectly. This makes the Tyndaly’th a dreadful and difficult weapon of last resort. 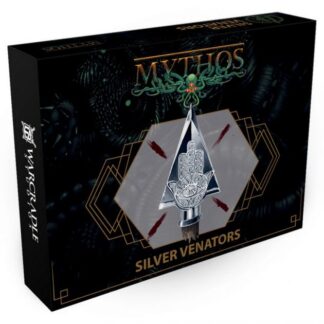