This multi-part plastic kit contains the components necessary to assemble a 10-man Primaris Reiver Squad. Clad in sleek yet brutally functional Mk X power armour, they feature a great deal of practical details – they each carry a great deal of extra ammunition and equipment pouches, as well as grenade harnesses and blade sheaths.

The models can be assembled as either a 10-man squad, a squad of 9 Reivers with a Sergeant or 2 separate 5-man squads, each with a Sergeant of their own. Each has an impressive selection of weapon options; 10 heavy bolt pistols, 12 bolt carbines and 14 combat knives are included, with the loadout options being carbine, pistol and carbine or pistol and combat knife. 2 of the sets of arms for combat knives feature a communications array on the vambrace, designed for the Sergeants. The bolt carbines each feature foregrips and curved mags for that tactical look, and 2 of them are modelled in the middle of reloading. Each model can also take a grapnel launcher – 10 are included in holsters, with a further 4 to be held in the right hand.

Each model can also feature grav-chutes – 20 fins are included, 10 for each side of the Reivers’ backpacks. They have plenty of helmet options, too – 10 helmets featuring their unique skull design, 10 with the top removed and the lower half remaining and 4 Sergeant-specific bare heads. Each chest plate is decorated with a skull and crossed dagger motif.

The Primaris Reivers come as 228 components, and are supplied with 10 Citadel 32mm Round bases and a transfer sheet. 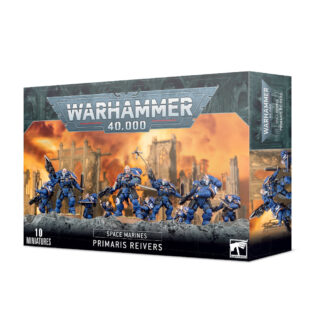