Don’t make us laugh. The green hair. The crazed smile. The maniacal cackle. You know exactly who he is and how far he’d go to put a smile on your face.

Whether by way of award-winning films like “The Dark Knight,” Emmy-winning animated programs like “Batman: The Animated Series,” video game appearances such as the record-breaking “Batman: Arkham Asylum,” or the countless comics stacking comic book shelves and digital libraries, the Joker stands unquestionably as the most recognizable and popular comic book villain in pop culture history. Unpredictable, violent and incredibly dangerous, he is chaos personified and has taken on everyone from his archenemy Batman to even the Man of Steel.

But Gotham remains his primary home and Batman his biggest adversary, and no hero is perhaps better suited as in many ways, the Joker is the polar opposite of the Dark Knight. Both were created by a great tragedy, but Batman has since vowed to do whatever it takes to prevent similar incidents, the Joker revels in creating chaos and destroying lives, believing that life’s a big joke and psychotically demonstrating that in a moment, it can all change.

Not much is known about his past, but his acts during the present are what define the Joker as one of the greatest threats to our heroes and the people they’ve sworn to protect. He’s killed a Robin, crippled Batgirl, and tortured and murdered countless people throughout the DC Universe—all just for a laugh.

Bat-Boxes are the ultimate way to jump into the action of the Batman Miniature Game! Each box contains a complete Crew and all the cards you need to play. In addition, in each Bat Box you will find a unique Objective for your Crew and a brand new scenario. If you’re new to the Batman Miniature Game, you’ll find a set of Quickstart Rules in each box, so you can start playing right away! 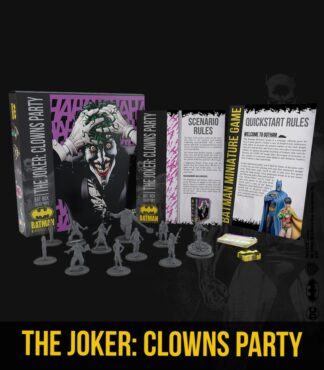 You're viewing: The Joker: Clowns Party £63.75
Add to basket