The Other Side – Core Rulebook

The Guild’s iron-fisted grip on the Soulstone trade has worn Earth nations raw, creating a powder keg of alliances and enemies. Just when a world war seemed ready to erupt, horrendous creatures from a plane known as Malifaux tore their way through reality. The true battle of survival has begun.

The Other Side is a game about allegiances doing battle across the Earth in a fight for supremacy and survival. Using 32mm miniatures, players will control squads of troops, powerful commanders and massive Titans as they attempt to defeat their foes and seize control of the Earth. Conflict is resolved through the use of a deck of cards, allowing players more control over their own destinies. The Other Side shares a world with Malifaux, but the games are not compatible.

One copy of The Other Side – Core Rulebook supplied. 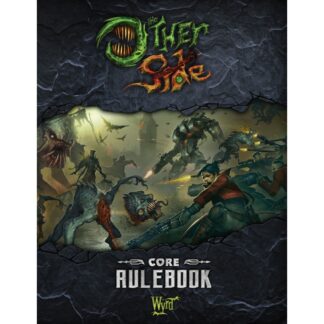 You're viewing: The Other Side – Core Rulebook £38.50
Add to basket