The Sabre is the primary main battle tank of the UCM, and forms the core of its armoured spearhead. It is a lightweight, low profile design which mounts a formidable UM-100 ‘Avenger’ Railgun on a folding turret armature. This makes the vehicle eminently suitable for dropship operations, as well as highly flexible on the battlefield. The gun can be raised to a height of 9.8 feet (centre-bore), giving the Sabre the ability to fire over obstructions while keeping the hull in cover.

The Rapier utilises the Sabre-type hull to mount a fearsome UM-28 ‘Vindicator’ Gatling cannon on a similar folding turret armature. This makes the Rapier an excellent anti-air unit, where the rapid traverse of its turret system can track fast moving aircraft with ease, while sending a hail of shells towards its target. The Rapier can also turn the Vindicator on massed infantry formations firing in ‘wide burst’ mode, causing unbelievable carnage.

Is there anything more Dropzone than UCM tanks? The sleek design with an armature weapon tells you everything you need to know about the UCM. The tanks are relatively light, with only a single crew member. The Colonials really know how to make the most of their fighting force! With Armour 15 these tanks are some of hardiest units in the game, perfect for UCM!

What can we say about Sabres that hasn’t been said already? We’ll just say it all again! Sabres are great. High armour, decent move, cheap points, and an awesome weapon. The Avenger Railgun is Energy 10, Articulated to fire from behind cover, and has great range and Accuracy. The Sabre is the bread and butter of the UCM army.

Even though they’re Support options, Rapiers might even be more numerous than the humble Sabre! With a fantastic AA weapon in the Vindicator gatling cannon, you’ll want a bunch of these in your army. Its 3 shots at Energy 7 will make most aircraft fly very carefully to avoid, and its Wide mode of fire can tear through infantry – even those hiding against edges of terrain!

Contains 3 resin miniatures with a choice to make 3 Sabres or 3 Rapiers. These miniatures are highly detailed, approximately 34mm in length. 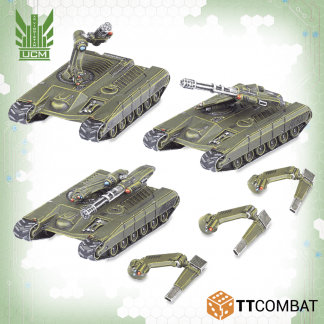