Kataphron battle servitors can come in the form of Kataphron Breachers or Kataphron Destroyers.

Kataphron Breachers are heavy movable fortresses, able to smash down structures and have a thick force-repelling armour as part of their ultimate tecnological frame. They are utilised by Tech-Priests to ram their way through enemy formations, the only signs of the humanoid fused inside is at the head and the torso. Their large caterpillar tracks grind over the most challenging terrain, wrecking all with heavy artillery such as metal ripping claws, brazen cannons, flamers and many other weaponry combinations.

Kataphron Destroyers have the same aggressive tank like build as the Breachers, unable to understand mercy and no morality guiding their path, they will reduce anything living to a bloodied slurry. A frightening and unpitying armament of the Tech-Priests, these mechanoids also carry a huge array of weapons like plasma cannons, phosphor blasters, claws and much more.

Within this kit you have everything included to assemble three Adeptus Mechanicus Battle Servitors. Choose to create Kataphron Breachers or Kataphron Destroyers, selecting from an assorted collection of arc rifles, torsion cannons, arc claws, hydraulic claws, plasma culverin assemblies, heavy grav cannon assemblies, phosphor blaster assemblies and three cognis flamer assemblies. A massive twenty-four weapon options is in this kit to customise the artillery how you wish. There are three sets of heads and torso armour with interchangeable exhausts as well as optional armour and mudguards.

This multi-part plastic kit contains an impressive 157 components, with which you can make three Adeptus Mechanicus Battle Servitors, either Kataphron Breachers or Kataphron Destroyers. Supplied are three Citadel 60mm Round Bases. 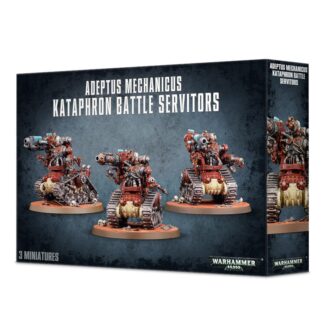