If the old O-Yoroi were the heavy armours of ancient samurai, their contemporary analogues are T.A.G.s, whose design is based on powered armour, for its agility, and one-man light vehicles, for their resistance and firepower. To distance itself from its Chinese competitors, the Japanese military industry has aimed for mobility and precision in the conception of its armoured units. The design philosophy of the O-Yoroi was strongly influenced by the views of military analysts that future conflicts would primarily develop in urban environments. The Japanese engineers have created a T.A.G. specifically adapted to urban combat, including hand to hand combat routines and point defence weaponry. Based on their machines’ abilities, the pilots of the O-Yoroi Kidobutai (?? ???? Mechanized Mobile Regiment) emphasise close combat techniques and training in the use of the sword, so becoming truly mechanised samurais. But it’s their fierce attitude, their audacity and their ideal of honour sustained by the edge of a katana that makes them truly admirable. Considered as elite troops, the O-Yoroi have proven their combat determination is so unbreakable that not even the kami (Gods), or Buddha itself, can distract them from their objective, always heading attacks and operations requiring an application of direct force.

To make the most of their momentum on the attack, the O-Yoroi use the ‘advance of the locust’ technique. When they find a focus of stiff enemy resistances, the initial O-Yoroi Kidobutai squads are deployed to make a fast assault on the adversary, while the other units bypass the enemy position to continue their advance. This technique was used with great success during the attack on the Stalpaert Industrial Complex, in the outskirts of Valkenswijk, Paradiso, during the NeoColonial Wars. While the first three O-Yoroi squads engaged in violent combat, building to building, the others moved around the complex and assaulted and took the Hildebrandt Bridge, opening a way into the inner city.

Please note: Miniature is supplied unpainted and some assembly may be required. 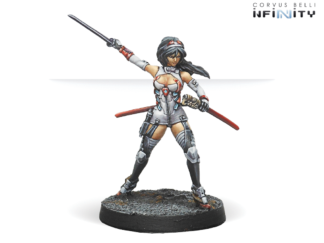